The Scarabaeidae are a highly diversified and cosmopolitan group of beetles, which worldwide appear to be represented by 2,200 genera comprising 35,000 species; of these, coprophagous beetles make up around 7,200 species. In nature, dung beetles are very useful as they provide a number of ‘eco-system services’. In particular, by clearing dung from ground surfaces, they avoid the formation of parasitic agents, and by digging their tunnels, they improve the porosity of the soil, and thus its airing and water infiltration, promoting its hydrological properties and the restoring of nutrients to the ground.[1]

Many dung beetles (those classed as ‘rollers’) are known for transporting dung in round balls which are then rolled from the collection point to their nests dug out underground. For these coprophagous insects, dung is used both as their source of nourishment and the material with which to shape the brooding chambers where they will lay their eggs. According to researchers of Lund University (Sweden), the University of the Witwatersrand and the University of Pretoria (South Africa), a number of dung beetles (Scarabaeus satyrus) follow paths guided by their observation of the Milky Way.[2]

In Ancient Egypt, the Scarabaeus Sacer (‘Holy Beetle’) was likened to Khepri, the ‘God of the Sunrise’; the scarab beetle was thus connected to the rebirth and immortality of the Sun, and the ball of dung was associated with the solar disc.

According to Daphna Ben-Tor, curator of the Egyptian Archaeology section at the Israel Museum of Jerusalem, the “dung beetle had been worshipped in Egypt ever since prehistoric times […] The Egyptian name for the beetle is derived from the verb ‘to be created, come into the world’. The Egyptians considered the insect to be the incarnation of the creator god, who had regenerated himself,” before coming to the conclusion that “the concept of the beetle as an incarnation of the creator god, whose cult, even in the Ancient Kingdom had come together with that of the sun god, [thus generating] the spread of the cult of Khepri, the god of the rising sun, depicted in Egyptian art as a man with a beetle for a head. Thus the beetle became a symbol of rebirth, akin to the morning sun rising every day.”[3]

Egyptian art, as is known, developed over a period of around three millennia; the figure of the scarab beetle and its transposition into artefacts such as amulets, seals, monumental sculptures or wall decorations therefore underwent variations on the basis of the changing eras, the historical/social/geographical circumstances and the reigning dynasties. But in brief, we might say that beetle-shaped amulets were among the most common in Egyptian culture, and that with the passing of the centuries, they also spread to the Middle East, Greece, Sardinia and Etruria; their size may vary from one to around ten centimetres; the depiction of the back of the scarab beetle may be realistic or very schematic and essential, while the base may be decorated with hieroglyphics, floral and/or geometric patterns, divine, human or animal imagery, or undefined. The materials also vary widely: there are pieces in steatite or semiprecious stone, and even rare exemplars in silver, ivory and gold. These little artefacts might have been placed in tombs as funeral decorations or used as talismans in people’s everyday lives. The largest scarabs (approx. 3.5 – 11 cm) are known as ‘heart scarabs’ – almost always in greenish stone, a colour associated with rebirth, youth and health – on the base of which a formula from the ‘Book of the Dead’ was often inscribed; the object would be placed on the chest or abdomen of the mummified corpse. For the Egyptians, the heart was the most important organ for it represented the essence of life; the ‘heart scarabs’ were supposed to protect the deceased during the ceremony of psychostasis, when the person’s heart would be placed on scales and compared with the weight of the heart of the goddess Maat, who symbolised truth, justice and order. 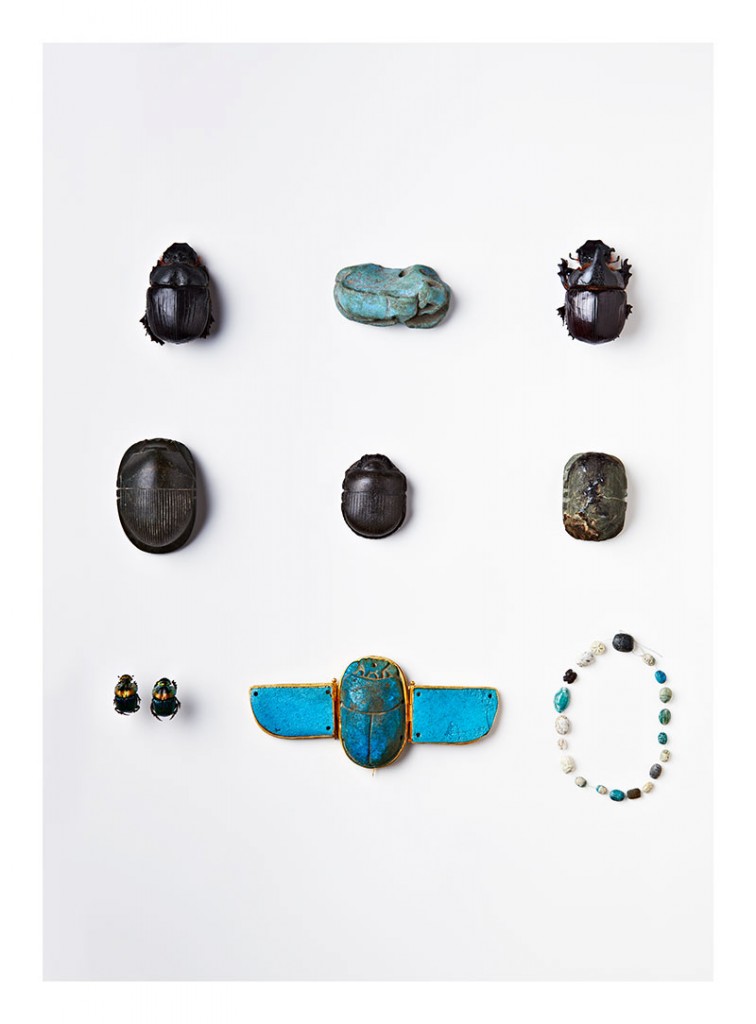 In The Shit Museum, various kinds of Egyptian scarabs made from different materials and in different periods are displayed. In a specially dedicated multimedia room, the Egyptian findings are placed in comparison with genuine ‘dry’ beetles – from various parts of the Earth – displayed in semi-circular glass cases. In the same room, on a number of tablets, numerous images appear showing the beetle as portrayed both in ancient volumes on entomology and in books and documents belonging to the Library and Archives of Egyptology of the University of Milan, selected in collaboration with the Egyptologists Patrizia Piacentini and Christian Orsenigo from the Department of Literary, Philological and Linguistic Studies of the Milanese University. What’s more, an audio installation reproduces the reading (using a ‘conventional pronunciation’ as elaborated by scholars) of an extract from the Bremner-Rhind papyrus (British Museum No. 10188) concerning the idea of ‘creation’ and featuring Khepri in the context of his verbal root.

A diorama shows both a curious video on the adventures of a beetle and the various different kinds of behaviour between ‘dwellers’, ‘ tunnellers’ and ‘rollers’, i.e. the beetles that respectively live inside the dung pile, those that dig tunnels just under the pile and lastly those that transport the ball of dung far from the place of origin only to then make their own tunnels and nesting chambers.

The eco-ethological and bibliographical information on beetles was supplied by Claudia Palestrini from the Department of Life Sciences and Systems Biology of the University of Turin. The scarab beetle is the logo-symbol of The Shit Museum.